Thieves in the night: can a slogan trigger real improvement in Romanian politics? 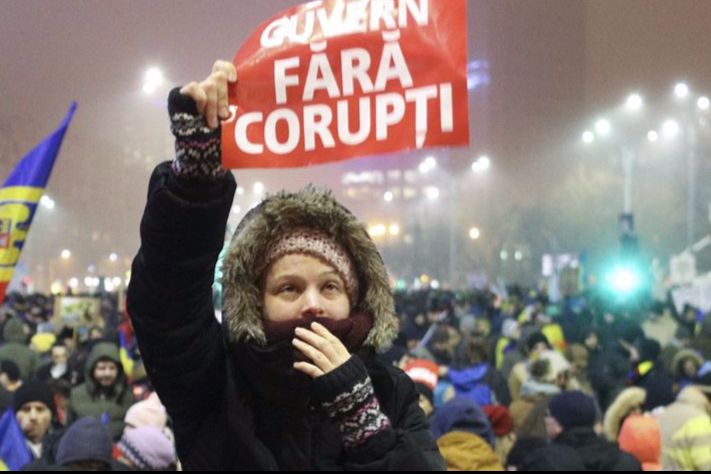 Text originally published by The Conversation.

It is rather unusual for a country like Romania to catch the eye of the international public to the extent it has in the past month.

An unprecedented wave of protests saw thousands of Romanians take to the streets regularly – night and day – despite the cold, reaching more than 600,000 people on February 5.

That peak day was crucial: thanks to people’s continuous involvement, the government has backtracked on a law, Decree 13, that could have weakened anti-corruption legislation, and made life much easier for corrupt officials and politicians.

But is there more to it? After the U-turn from the government, Romanians remain uneasy and restless. While parliament has approved a public referendum, initiated by President Klaus Iohannis as a tool to show public support for anti-corruption laws, it will do little to appease those who are demanding that such political moves never take place again.

A profound discontent with elites

Decree 13 has indeed triggered something deeper within Romanian society. It has been seen as a symbol of everything that is wrong with Romanian politics, starting with a profound discontent with political elites.

Romanians blame the government, which was formed in early January by a coalition of the Social-Democrats (Partidul Social Democrat, PSD) and a centre-right liberal party, (Alianta Liberalilor si Democratilor din Romania, ALDE). The current PSD leader, Liviu Dragnea, who holds a suspended jail sentence, would have benefited from the law.

When people took to the streets, the most iconic slogan was: “Stop stealing at night like thieves!”

The slogan is meaningful because it captures the problematic essence of this law. It was passed as an “emergency decree” at night, on January 31st, despite the president’s disapproval and interference, snubbing several protests organised days before and repeated calls from civil society against the measure. It came as a shock after years of strong legislation to prevent corruption.

The sensitive topic and the perceived arrogance of the PSD-led government in adopting the decree in secrecy formed the perfect package to ignite an already active culture of protests and discontent.

Protests have always been a regular feature of post-communist Romania.

People took to the streets in January 2012 against an austerity drive; in September 2013 against a gold mining project; before 2014’s second round of presidential elections; and in 2015, against then-prime minister Victor Ponta, who was accused of corruption and held accountable for a tragic fire that killed 64 young people in a club.

This series of protests are rooted in Romanians’ disenchantment with their political institutions and their representatives. The two main institutional pillars – the political parties and the parliament – have the lowest level of trust compared to all other institutions.

In the past decade, public trust has never gone above 15% and it sometimes drops to as low as 6%. Politicians are regarded as the root of corruption that alters other key sectors of daily life, such as the health-care and education systems.

The protests raise one legitimate point of counterattack for the PSD, which claims that protesters do not value the result of the election in December (when the party got more than 45% of the vote) and that many of the people on the street did not even vote.

While there is no sociological tool to measure the votes among anti-PSD electorate, it is obvious that the turnout at the election was low. The lowest turnout (less than a third) was among 18 to 34-year-olds, who are well represented in the protests.

Low turnouts largely favour parties with a stable and loyal electorate like PSD’s.

In this context, many anti-PSD voices seem to focus on PSD voters, blaming them for the way their party behaves. The frustration of anti-PSD Romanians – younger, better educated, richer – is in the contrast to those who vote for PSD – older, with lower education, poorer.

The former feel PSD voters are easily manipulated, uninformed, and incapable of understanding the real issues that the Romanian society is facing.

Some of the main media outlets cultivate this cleavage in Romanian society by issuing divisive messages about “the other side”, depending on their political orientation.

For instance, the TV news stations favouring the PSD (such as Romania TV or Antena 3) broadcast conspiracy theories claiming that protesters were paid by foreigners, pointing mainly to George Soros (known for his support of various democratic movements in Eastern Europe), while the other side claims PSD is infiltrated by violent individuals.

But the focus should be elsewhere. PSD’s electorate is quite stable. Regardless of the party’s behaviour, the election results in the last decade show that there is constantly a segment of 3 or 3.5 million citizens who are easy to mobilise and convince for the party.

Perhaps they do represent the more conservative, more socially insecure fragment of Romanian society. But, still, these citizens have the right to vote, the right to formulate opinions and to act according to them. From a certain perspective, their discipline is rather a strength of representative democracy, as they are citizens who wish to play by the rules and make their voice heard, at least when it comes to voting.

The anti-PSD electorate, on the other hand, is much more problematic. To some it is a puzzle why PSD keeps losing presidential elections and keeps winning parliamentary and local elections.

The explanations are not difficult to find. Wherever there are direct elections for the president, citizens are more aware of their relevance. In 2014, the turnout was 53% in the first round and 64% in the second one. When it comes to voting for parties and for the parliament, which have low rates of trust from the people and whose crucial role is somewhat overlooked, turnouts are lower, especially among the anti-PSD electorate.

In other words, if this bubble of 15% to 20% of the electorate – visible in the presidential elections and probably present at the protests – mobilises in the parliamentary elections as well, the PSD would never reach this kind of status and influence. It would be an influential party, by all means, constantly located at around 30% to 35%, but it would not have the same kind of dominant position.

What do Romanians want?

So what can come after this new wave of protests? It is essential for Romania to keep a sound image for its Western allies. The commitment to the fight against corruption and towards Euro-Atlantic democratic values has been the backbone of Romania’s international reputation in the past decade.

This matters beyond the country’s borders. After 2010, the region has witnessed a growth of illiberal tendencies in Hungary, Poland, the Czech Republic, Turkey.

The security climate is at continuous risk, given Russia’s increased assertiveness to regain its spheres of influence but also the threat of terrorism and the general uncertainty generated by political instability in key Western states that used to be the guardians of the region’s security.

Despite the intervention of Western governments and the European Union to sanction the behaviour of politicians, overall Romania’s image has been strengthened. Not by the politicians, but by the reaction of the masses. It was seen by many as a lesson of democracy or the purest form of manifestation of democratic spirit.

One must not overlook the strong, visible pro-EU component of the protests: many people during the protests came with EU flags, shouting “EU, we love you!” It demonstrated a powerful desire to protect the values associated with the EU, at a time when they are under strong critcism in Western member states.

For now, protesters have reached their goal. But the energy of the protests now need to be focused on improving the tools of democratic representation and the political elite.

Voting in large numbers in the parliamentary elections is one easy solution. But the solutions that would truly change the political game in the long run need to address a range of laws, on election rules, candidates and party funding, or how far the government can go with its decrees.

Whether the protesters like it or not, the fundamental decisions lie in the hands of the same politicians whose decisions forced them to take to the streets and who acquired power through free and fair elections with a low turnout. It is a paradox of representative democracy that Romanians - politicians and protesters - must learn to work with.