Reforming the mechanisms of political representation in Romania 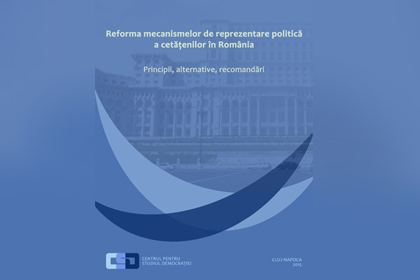 This report presents the vision of the Center for the Study of Democracy regarding the reformation of the main institutions and laws playing a key role in the political representation of Romanian citizens. Our ultimate goal is to encourage citizen participation within the political sphere, the efficient aggregation of their interests in the political system, and their accurate implementation into public policies.

The principles found in our vision represent the foundation of a comprehensive public communication and institutional advocacy campaign aimed at developing new laws related to the political system in Romania, led by CSD from January to June 2015, as a civil society organization with academic expertise in the field of Political Science.

(1) Context – challenges the Romanian democracy faces today involving the representation of citizens’ interests by politicians from an international context.

(2) The principles representing the foundation of our recommendations.

(3) Directions for a long-term reform of political institutions and the mechanisms to ensure citizen representation.

(4) Technical proposals from the Center for the Study of Democracy created between January - June 2015 derived from the bills debated by Parliament during that period.